Size: about the size of a lemon
What’s Bubs Up To: I think I’ve felt some movements but still hard to tell. Lots of facial movements are apparently being done too.
Symptoms: crap sleeps, exhaustion, not being able to stand up for too long, feeling uncomfortable – not a fun week. Non-stop eating!
Cravings: salty foods and home-made asian dipping sauce
Keep that away from me: I still don’t have anything
Weight: 71kg (woo hoo I was getting concerned with no exercise and the amount I was eating!)
Feelings: A bit more out of touch with the pregnancy after my GP was still voicing concerns and even mentioned contractions! Excited because I have an appointment at the Birth Centre.

Random: I told work and everyone was excited and happy, looks like I’ll be working up to my due date though if not beyond haha.

I realised I’m doing these at the end of the week as I’ve just hit 15 weeks. So consider this week down not current week! I’m terrible with all this second time around.

You are kicking our butts and you are the shortest month of the year. Please kindly end and March, if you’re listening could you bring some cooler breezes throughout the day and a lotto win?  Oh and no more expensive bills we’re spent both literally and figuratively.

PS: This living on one salary thing is hard work. I’ll expand more once March has graced us with her presence.

PPS: Are all months girls? I get the feeling August is a boy but just because I like the name (and no I won’t be doing that to our child!)

PPPS: I had Logan taken off my hands so I could indulge in a much needed hair cut. New hairdresser who I loved but I think I went a bit too short at the back. Oh well it’s growing like crazy now I’m pregnant!

So I suck at schedules, I should’ve worked that out from my parenting style…that and my university lifestyle! 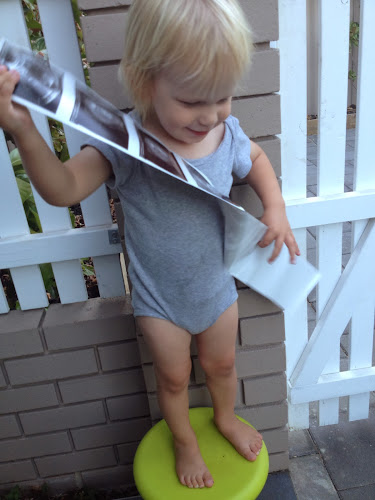 He still isn't aware that he's going to be a big brother but we had lots of fun with the announcement photo taking – including scrunching up the ultrasound photos!

Linking up with Jodi from Practising Simplicity.

Size: 9cm (according to the scan) approx 43g
What’s Bubs Up To: belly sleeping according to the ultrasound.
Symptoms: being exhausted pretty much from 930 for the rest of the day although I do perk up at night, dizzy if I get up too quickly, still spotting (grr)
Cravings: sweet things like there’s no tomorrow, nectarines and KFC chips
Keep that away from me: nothing at this point in time although I will say no to a lot of stuff offered
Weight: no idea I haven’t weighed myself in ages.
Feelings: A little less stressed after having the scan but still nervous due to the bleed.

Random: I’m nervous about not getting into the Birth Centre as my other option isn’t great and I do not want to go private. We’re still struggling to come up with a nickname for this Bubs. Pecan was easy but this baby isn’t revealing itself just yet!

Some of you may have noticed that I’ve been a bit quiet lately, other than participating in Project 52 & bringing back Gr8 Week. Now you know that I had a pretty good reason: I’m 13 weeks pregnant!

Unfortunately, it hasn’t been the easiest of pregnancies – no morning sickness (thankfully) instead many a ‘threatened miscarriage’ which, is another reason why Sri Lanka wasn’t a fun trip. Tonsilitis combined with bleeding/spotting and a visit to a Sri Lankan hospital – not for the feint of heart!

I haven’t really wanted to share this on the blog but at the same time, I’ve been desperate to because most of you have been sharing in my life since before I got married! Other than the somewhat non-stop bleeding (sorry if TMI) and trips to the emergency department, this pregnancy hasn’t been that different to my last with Logan. The exhaustion has now officially kicked in and I’m eating the cupboards bare.

I’ve only take 1 bump photo and that was right before a huge bleed. I feel like taking them is poking an angry bee-hive so I’ve been putting it off but now I’ve had the proper scan (number 5!) I at least feel safe in sharing. It’s still really scary though and hard to put anything ‘out there’. So bear with me, I’m sure I’ll open up a lot more when I can start feeling our little bubs grooving around in there.

Taken by the Hubby. It’s nice to know he appreciates frangipanis as much as his Mum!

Linking up to Jodi’s Project 52.

This week is just a short one even though there’s many more things I’m thankful for being struck down with a cold put a dampner on it all. I guess the biggest happy surprise of the week was feeling much more engaged and happy at work which is always a plus! 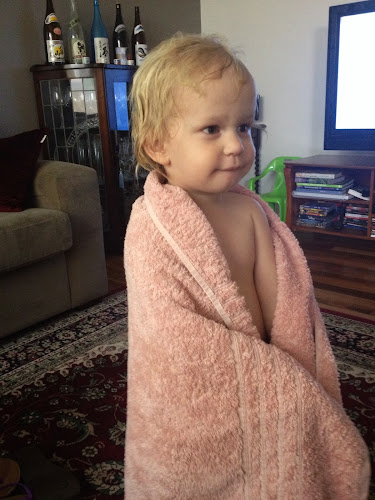 Looking too cute in his pink towel after a swim in the “pool” with Grandma. But it was a toss up with the photo below, he is already hating the camera 😦 I thought I had years left before that happened! 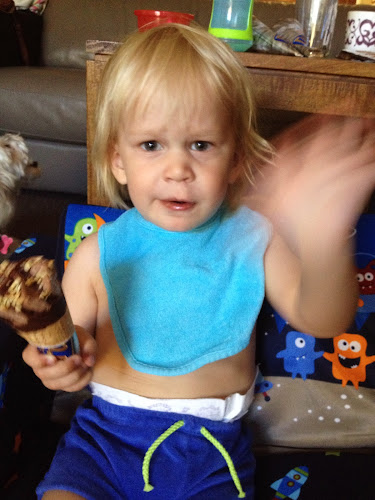